Diego Suarez was born in 1992 in San Jose, Costa Rica. He began piano studies at 8
years old, at the School of Musical Arts of the University of Costa Rica. Since his early years of
studies, he performed in countries like Italy, Spain, Mexico and Chile, invited by organizations
such as ISME (International Society for Music Education) and FLADEM (Latin-American
Forum for Musical Education). He has also participated in festivals such as the International
Keyboard Institute and Festival in New York, the Charleston International Music School, and the
Charleston Chamber Music Institute in South Carolina. Since 2011, Diego has been invited to
perform regularly at the Piccolo Spoleto Festival. 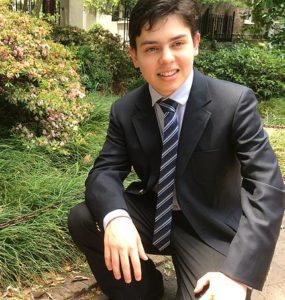 While in his native country, as well as abroad, Diego has studied and performed an
extensive repertoire that spans from Baroque to Contemporary works. He has given recitals with
works such as the 24 Chopin Etudes and the 12 Transcendental Etudes by Liszt. He also enjoys
performing chamber music.

During his studies in the United States, he has won many awards, including the 2013
Edwin Davis Peacock Award for Excellence in Piano, and the 2014 Sue Simons Wallace Award
for Excellence in Music at the College of Charleston. He released his first CD in 2012, with
Liszt’s 12 Transcendental Etudes. In 2018, he appeared in the program “My Life in Music” of
The Classical Station WCPE in North Carolina.

Diego began his teaching career in Dublin, Ireland, where he served as a piano teacher in
2015/16 at the Royal Irish Academy of Music.
Diego holds a Bachelor’s Degree from the College of Charleston in South Carolina, and a
Master’s Degree from the Shenandoah Conservatory in Winchester, Virginia. He is currently
enrolled under the Artist Certificate Program at the College of Charleston with the guidance of
Professor Volodymyr Vynnytsky.